The EcoDecors Eleganto Teak Shower Bench is a gorgeous, solid teak wood shower bench/stool with a more rustic appearance. Recommended for anyone weighing up to 250 pounds who loves the rustic aesthetic offered by this model. 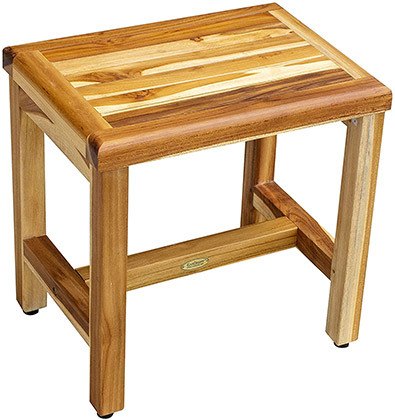 Are you in the market for an attractive bench-style shower stool? Is your home decorated in a more rustic style? If you answered yes to both of those questions, then you’re going to be thrilled with what you read in this review.

EcoDecors is a well-respected company in the industry, importing handcrafted wares made in Indonesia with solid teak wood. Their products are both stylish and functional. Since they’re handcrafted, although there’s a high degree of standardization, each one has subtle differences that will make your shower stool unique, and there’s something to be said for that.

Not everyone is a fan of the more rustic look and feel that this model brings to the table, so the EcoDecors Eleganto teak shower bench may not be for you, but if you’re a fan, read on. In the sections that follow, we’ll tell you why it deserves to be on your shortlist of options to consider.

An Overview of the EcoDecors Eleganto 18” Teak Wood Shower Bench

Handsome. That’s the term that’s likely to spring to mind when you see the EcoDecors Eleganto teak shower bench for the first time. In our view, it’s misnamed. It’s an incredibly attractive accent piece, but we feel it would be a mistake to describe it as elegant in any language.

Even so, if you’ve been considering investing in a shower stool and you’re a fan of the aesthetic it brings to the table, this one’s going to win you over. Let’s begin by reviewing the core stats that define this model.

They are as follows: 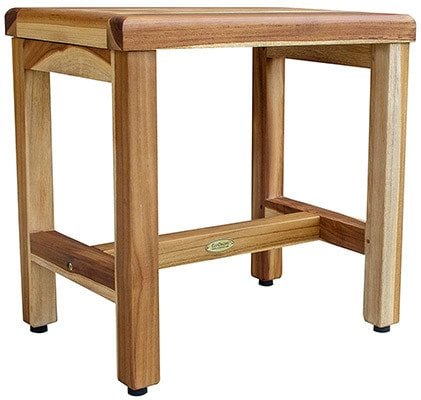 These are generally very good numbers. The seat is at the leading edge of the big and tall range, which starts at 18” in height and goes up from there. The width is also a good fit for the vast majority of the market, especially given the stool’s weight limit, which we’ll have more to say about in a moment.

It is perhaps not as wide as it could be, at only 14”, but given the length of time you’ll typically be spending on it, it’s certainly acceptable.

The weight of the stool might surprise you, especially if you compare it against medical shower chairs, but remember: most of those are made from tubed aluminum and plastic, where this one is crafted from solid teak wood.

The only real limiting factor here is the weight limit. Most of the furniture on the market today support in the neighborhood of 300-pounds. 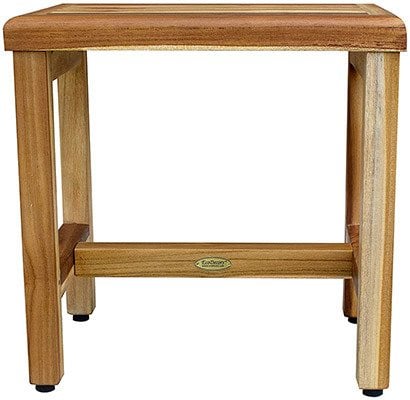 If you’ve been shopping for teak wood shower stools, you’ll note that the vast majority of them fall well short of this mark, and the Eleganto is no exception. No matter how much you might like the look of it, if you weigh more than 250-pounds, this model just isn’t for you.

Be aware that given the overall dimensions of this product, unless you have an oversized tub, it’s not going to work as a bath stool. This model was designed for use in walk-in showers. If you wanted to use it as a water-resistant accent piece in your bathroom, it’s fine for that purpose too.

There’s actually nothing to say about either of these things where the EcoDecors Eleganto 18” teak wood shower bench is concerned.

Unlike many of the teak wood stools you can buy, this one isn’t adjustable in any way. And as a piece of hardwood furniture, it’s about as comfortable as you might expect.

We’d like to note here in our EcoDecors Eleganto teak shower bench review that the stool does have rubberized feet, which gives it a firm grip on the bottom of your shower. Each foot can be adjusted independently to keep it perfectly level, even on the sloped floors that most showers come with. 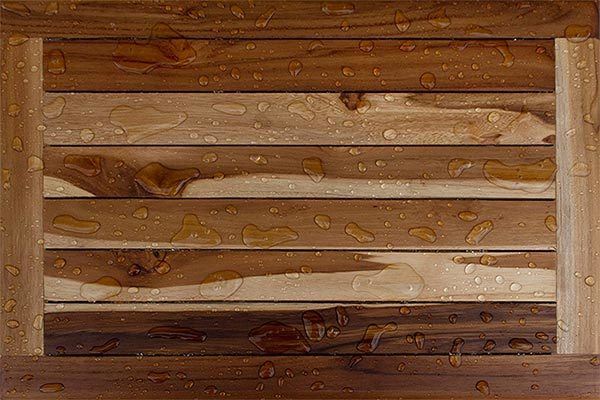 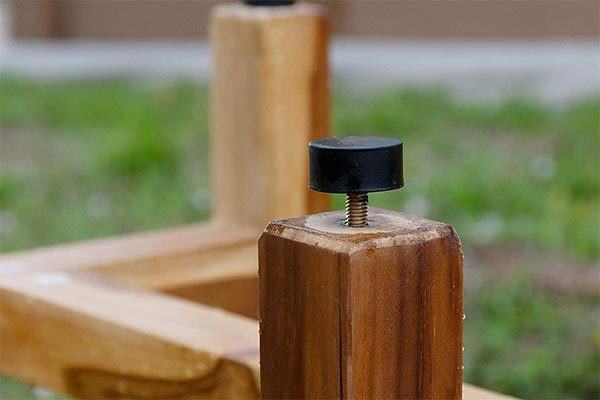 One thing we were genuinely disappointed by where this design is the fact that there’s no shelf below the seat, and the design could easily have incorporated one. It’s not the end of the world, but the addition of a shelf would have added even more value to an already great product. We regard it as a missed opportunity.

As is the case with most of the furniture you can buy online these days, if you decide you want one of these, it will arrive at your door in a medium-sized box and in several pieces.

The good news is that the production quality is very high and the few pieces you’ll have to deal with fit together seamlessly, making the process about as simple and painless as it can be. Kudos to EcoDecors for doing such a great job on that front!

The aesthetics of the stool will be the reason most people choose this one over some other teak wood shower stool. Many of the designs available are corner models or feature Asian design influences.

They look great, but honestly, not everyone is a fan of that look, which makes this product stand out all the more because it’s so very different.

That is something of a two-edged sword, though, because by the same token, if you’re not a fan of this model’s more rustic appearance, you’ll probably give it a hard pass without thinking twice.

The two key determinants most people will use to decide whether to buy the EcoDecors Eleganto teak shower bench or some other are the weight limit and the rustic look. If you’re 250-pounds or less and you like the look, this is the shower stool you want. Otherwise, you’ll be happier with something else. On that basis, we provisionally recommend it. 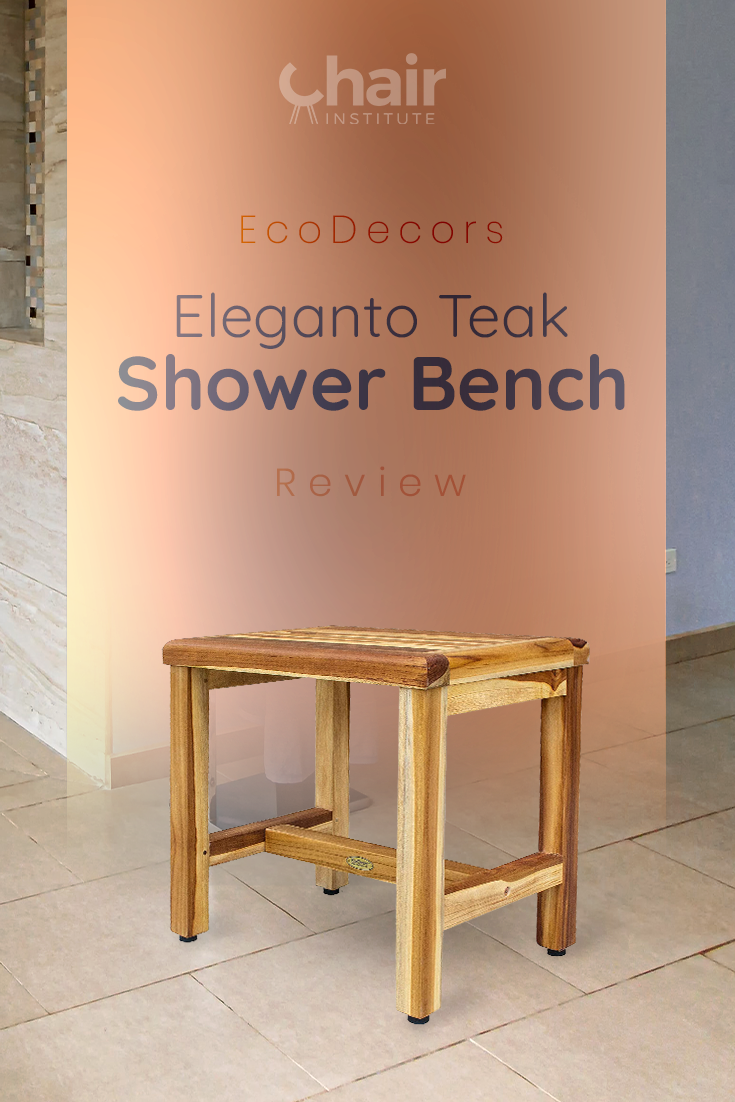