The mighty Dreamwave gets compared to just about every other top-end chair on the market, and with good reason. It is widely acknowledged as being the best massage chair in the world.

In every comparison we’ve done so far, it has come out on top. Will it continue? 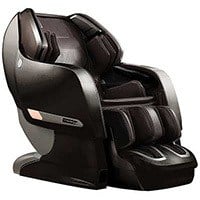 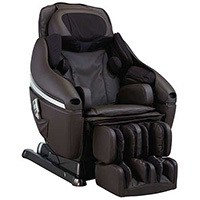 In this head to head comparison, we’ll take a look at the Inada Dreamwave vs Infinity Imperial, making a point by point feature comparison and awarding a point to whichever chair offers the superior implementation.

In the event of a tie, one point will be granted to each chair.

Note that we’re weighting all features equally for our comparison.

You may hold certain aspects of one design or the other of greater importance, so your final score may differ from ours.

That’s fine, but this will give you an excellent starting point in terms of making a decision about which chair is right for you.

Right off the bat, the Imperial scores a point, because it is built around a Hybrid ﻿L/S Track﻿ design, measuring 49” in length. It extends well below your tailbone and under the seat, where it allows the rollers to massage your glutes and the backs of your thighs.

The Dreamwave utilizes an industry standard S-Track which provides a great back massage but does not continue under the seat like the Imperial’s track does.

Both chairs use quad rollers, which closely mimic the feel of human hands. The massage quality is excellent, but this point gets awarded to the Imperial. The two models both feature 3D Body Scanning Technology and an option for manually adjusting the rollers and the width of the massage field. Although the under-the-hood particulars vary slightly, the result is the same. We’re rating this a tie, so no points to either side.

This is a great feature that enhances the overall massage experience by reclining you such that your knees are above your heart. From this position, most of your body’s weight is pressing against the chair back, allowing the rollers to penetrate more deeply.

The Dreamwave offers one Zero-G seating position, despite being the more expensive chair, and the Imperial offers two. Another point to Infinity’s offering. This technology places extension arms on the rollers, which allow them to move up to 3” farther away from the massage track than they would be able to otherwise, which is another feature that results in a deeper massage experience. The Imperial has it, Dreamwave doesn’t, so another point to Infinity’s chair.

We genuinely wish that every massage chair on the market incorporated this technology into their designs because its presence makes any model that utilizes it so much more accessible.

By pivoting on its base as the chair reclines, it minimizes the space required between the back of the chair and the wall it’s set near. The Dreamwave does not utilize this technology, and the Imperial does. Another point to Infinity!

We could go into great detail about the number of techniques on offer in this part of our comparison, Infinity Imperial vs Inada Dreamwave, but the long and the short of it is this: Both chairs have the basics covered, and both offer Shiatsu as an advanced technique.

The fundamental difference between the two lies in the total number of massage combinations available.

The Imperial offers slightly more than a hundred, which is about average for a chair in its price range. The Dreamwave has more than ten times that number (yes, you read that correctly – more than a thousand total massage combinations!). This one’s no contest, and the Dreamwave gets a point on the board. This is the feature that the Dreamwave is known for. It sports a mind-boggling 101 airbags and gives the hands down best air massage in the industry. The Imperial comes closer than any other chair we’ve ever compared with this Colossus, but with 76, it falls well short. Once again, Dreamwave wins the point handily.

The Dreamwave offers ﻿﻿﻿﻿lumbar and seat heat, which is impressive, but the Imperial offers heat in the lumbar area and the foot wells and incorporates heated massage rollers, which makes it the superior feature implementation. Point to Infinity.

A minor feature with some therapeutic benefits, in that it helps improve blood flow and circulation in the hips, thighs, and glutes. The Dreamwave has it, and the Imperial does not. Point to Inada. Both chairs offer this feature, which allows you to focus the massage rollers on the problem areas of your back and give them all the attention they need. This is a tie, so each will get a point.

There’s no doubt that the airbag portion of the ﻿Dreamwave﻿’s foot & calf massage is superior. It simply has more airbags and produces a better result. Having said that, the Imperial utilizes massage rollers and airbags for both the calf and foot portion of its massage and has heated foot wells.

Even better, the foot massage is adjustable via the remote, through three different intensity levels, and the foot rollers render a genuine Shiatsu massage.

Infinity always does a good job in this area, but they pulled out all the stops when designing the Imperial, and it wins the point over the Dreamwave.

The Imperial offers an extendable Ottoman in name only. The maximum height the chair will accommodate is only 6’3” which is the industry standard. The Dreamwave will support users up to 6’5” in height, so we award this point to Inada’s offering.

Inada’s design focuses on the critical elements of ﻿massage﻿, and that doesn’t include music support. The Imperial is loaded with convenience features, and offers the best music support implementation we’ve ever seen, featuring both Bluetooth compatibility and a USB port.

This enables you to either load music onto a jump drive and plug it into the chair, or wirelessly connect your phone to the speakers and use the USB port as a charger. A fantastic implementation and another point to Infinity’s chair.

While both models offer massage time adjustment, the Dreamwave gives its users more granularity and features a maximum message time of a full hour. This is vastly superior to the Imperial’s timer, which has a much more limited range. Point to Inada.

This is an incredibly powerful therapeutic feature, and both chairs offer it. Usually, we’d rate this a tie, but the Imperial goes a step further, offering a waist twist, which is a less aggressive option that provides the same benefits.

In both cases, the feature works by having the airbags in the ﻿﻿leg﻿﻿ massage ports hold you in place as the chair reclines at an ever-steeper angle, taking pressure off compressed discs in your spine in much the same way that a chiropractic adjustment does. In this case, the Imperial simply offers more options than the Dreamwave, so we award the point to Infinity.

While both models do an excellent job on this front, again, the Imperial does it better, by providing three different control methodologies: A remote, in the form of a 7” touchscreen tablet, a built-in control suite in one of the chair arms, and a downloadable app. Infinity gets yet another point.

This is something we don’t often talk about, but since a massage chair is a significant investment, you want something that lasts. When there’s a problem, you want to know that the company you bought it from will stand behind their product.

Infinity’s not bad in this department, but Inada is better by a wide margin. This won’t matter until and unless something breaks, but when that day comes, it will matter very much. Point to Inada. At this point in our ﻿Infinity ﻿Imperial vs ﻿﻿Inada ﻿﻿Dreamwave comparison, Infinity’s offering has a compelling lead, and we haven’t even gotten to the chair’s finishing touches which include both Air Ionization and Chromotherapy.

Neither of these features adds to the therapeutic value of the model, but both add a high degree of polish to the design and would add two points to Imperial’s score since Inada offers neither.

Our final tally then, would be Dreamwave with 48 stars and Imperial with 52, which is a huge upset victory, since the Imperial costs significantly less money.

Bear in mind, however, that while the Dreamwave won in fewer categories, the areas it excels at, it wins by massive proportions, offering far more massage options and a superior air massage mode.

These are core elements of a great massage. The Imperial wins by offering a vast number of features, but many of them are minor or convenience features (Chromotherapy, Air Ionization, multiple control options, etc.).

it comes down to what you’re looking for...

If the sheer number of features and conveniences matter, then the Imperial is the chair for you. If you’re more interested in focusing on the overall quality of your massage and maximizing your number of options, then the Dreamwave is the better choice, even though it costs more.

In our view, while the Dreamwave delivers an excellent massage, the reality is that most people are never going to use much more than a hundred massage combinations, and Inada would be better served by scaling this back and focusing on adding more features to their offering.

In a surprise victory, the Infinity Imperial dethrones the reigning King and represents a better value for the money.